Art Lander’s Outdoors: A look back at the history of Lake Cumberland’s fabled striped bass fishery

The story behind the first stocking of Striped Bass in the 50,250-acre reservoir is unprecedented and unique in the state’s fishery management history. In 1957, a crew of employees from the Kentucky Department of Fish and Wildlife Resources (KDFWR) traveled to South Carolina and caught 12 adult Striped Bass on rods and reels. The fish were transported in a fish truck back to Kentucky, where they were placed in Lake Cumberland.

The massive, deep reservoir in south-central Kentucky, impounded from the Cumberland River, was chosen to be the test lake for this new sport fish because of its abundance of cool water habitat and tributary streams. 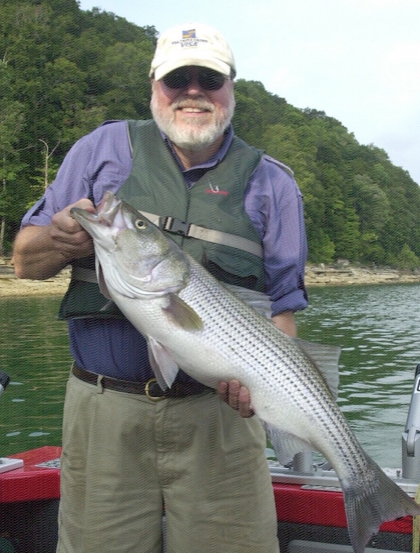 Lake Cumberland offers good fishing for a number of species, but striped bass fishing stands out among anglers (Photo by John Lander)

The Striped Bass (Morone saxatilis), a sleek, powerful fish with firm, white flesh, has long been regarded as one of the most important game and food fishes in the U.S.

Until the late 1940s Striped Bass existed only as an anadromous species, a fish that was born in freshwater but spent most of its life in saltwater, returning to freshwater to spawn. Naturally occurring populations are found along the Atlantic Coast, from the Gulf of Mexico to the Gulf of St. Lawrence, in Canada.

But when a land-locked population developed, and successfully spawned in the Santee Cooper Lakes (Marion and Moultrie) in South Carolina, hopes were raised among fishery biologists that this quality species could be established in other large reservoirs throughout the region.

In its potamodromous form, the striped bass spends its entire life in freshwater, migrating to headwater tributaries to spawn.

The preferred common name is striper, but some old-timers probably remember when Striped Bass were called rockfish, a common name attributed to its saltwater heritage.

The striper’s body shape is elongated and less compressed than the White Bass, with a moderately forked tail and largemouth.

Coloration is dark greenish to bluish above, with pale, silvery sides that have seven to eight dusky longitudinal stripes. The base of the tongue has two parallel patches of teeth.

Stripers in excess of 50 pounds have been taken from Lake Cumberland.

Throughout the late 1950s and 1960s Striped Bass fingerlings and fry produced in South Carolina hatcheries were placed in Lake Cumberland and a few other reservoirs in Kentucky.

Fishery biologists had high hopes that stripers would reproduce and someday populations could be established throughout the state.

But, over time it became apparent that the absence of oxygenated water in the temperature range that stripers prefer was a limiting factor on the establishment of striper populations in some lakes.

Striped Bass never got off a significant spawn in Lake Cumberland, but fishery biologists found that a quality population could be maintained by annual stockings.

Art Lander Jr. is outdoors editor for the Northern Kentucky Tribune. He is a native Kentuckian, a graduate of Western Kentucky University and a life-long hunter, angler, gardener and nature enthusiast. He has worked as a newspaper columnist, magazine journalist and author and is a former staff writer for Kentucky Afield Magazine, editor of the annual Kentucky Hunting & Trapping Guide and Kentucky Spring Hunting Guide, and co-writer of the Kentucky Afield Outdoors newspaper column.

In recent years the source of Striped Bass fry has been a hatchery operated by the Tennessee Wildlife Resources Agency (TWRA). Muskie and Walleye fry produced at Kentucky’s Minor Clark Hatchery are traded to TWRA for the Striped Bass fry KDFWR receives.

Lake Cumberland’s Striped Bass population blossomed in the mid-1980s when 25 to 30-pound fish were common.

Up until the mid-1980s anglers predominately caught Striped Bass by trolling deep-diving crankbaits, but they soon learned how to catch them more efficiently by drifting shad, shiners, and other bait fish on planer boards and balloons. Eventually, the number of large fish in the population declined.

When the Alewife (Alosa pseudoharengus) became established in the lake in the 1990s, Striped Bass behavior was altered. Most notably, stripers began feeding less on the surface, since Alewives prefer colder water, which is typically deeper than what shad prefer.

Native to North America, but not Kentucky, the Alewife not only feeds on plankton that gamefish eat, but the gamefish themselves, when they are in their larval form (newly hatched).

In recent decades the Striped Bass fishery in Lake Cumberland has had its up and downs, impacted the most by prolonged lake drawdowns during dam repairs, which compressed cool water habitat, and unseasonable weather, droughts, and floods. But, a fine-tuning of the regulations and continued annual stockings, has helped the lake maintain its status as Kentucky’s best Striped Bass fishery.

Striped Bass are scattered all over Lake Cumberland, but some the best fishing is in the lower lake. Top embayments are Beaver Creek, Otter Creek, Wolf Creek, and Lily Creek.

Arguably, the best fishing of the year occurs in the spring, when Alewives, Gizzard Shad and Threadfin Shad are spawning.

In April, Striped Bass scatter out over the flats at the heads of creeks. They are cruising shallow flats, or laying on the bottom of creek channels, looking up for prey swimming along the lip of the drop-off. That time of year stripers often push bait into shoreline shallows, usually on a point. 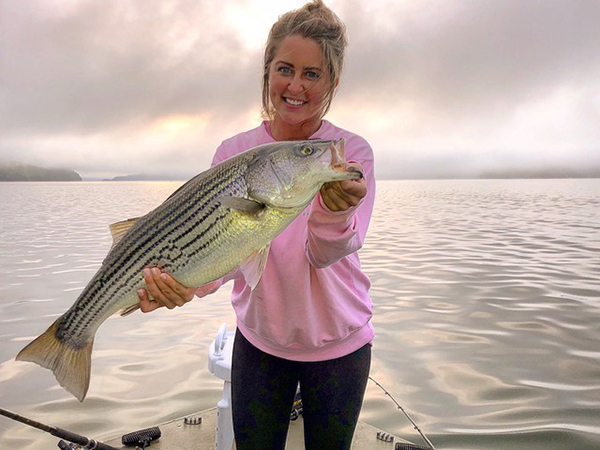 Striped Bass are a sleek, powerful fish with firm, white flesh that has long been regarded as one of the most important game and food fishes in the U.S. (Photo from KDFWR)

Baitfish congregate around bluffs, too, because the sun shining on rock walls warms up the upper layer of water along the shore.

When drifting live bait on planer boards in shallow water in the spring downsize the weight on the line to as little as a quarter-ounce, and drift slowly. Since stripers can be finicky in the spring, some anglers downsize their bait too, fishing smaller shad and shiners, or Alewives, nose-hooked on 3/0 hooks.

With lighter weights and smaller baits, it’s a more natural presentation. Drift the live bait parallel to the banks. When you speed up the trolling motor, the bait comes to the surface. If you slow the trolling speed, the bait sinks, so you can very the depth being fished.

Later in the spring, when stripers move out onto the main lake and suspend over river channels, it’s a simple matter of adding more weight, to fish deeper.

In the summer, some anglers only fish early and late in the day, or at night, because of heavy pleasure boat traffic most of the daylight hours.

In the early fall, as the thermocline starts to break up, Striped Bass scatter. Trolling crankbaits or bucktail jigs with curly tail trailers on downriggers, or trolling Alabama rigs is effective because anglers can cover a lot of water more easily to find actively feeding fish.

Other productive fishing techniques are vertical jigging slab spoons and casting topwater lures. The Cordell Redfin, retrieved so that it wobbles across the surface like a wounded shad, is a good choice when there’s surface action.

Later in the fall, when the surface water temperature drops into the 60s, stripers move back into the tributaries in about 20 feet of water, making nighttime feeding forays in the shallows at the heads of creeks.

The winter pattern might be the most predictable of all because that’s when stripers school up tight and stay close to baitfish that are in search of the warmest water, usually over mud flats in the backs of bays.

Probably the most effective presentation for stripers at all depths is drifting live bait on planer boards.

Line is attached to the front of the planer board by a small clamp, called a pinch-pad release, and threaded through a snap swivel at the rear of the board.

When line from the rod and reel is fed out, the board “planes” away from the boat. This enables live bait or lures to be fished where wary fish won’t see the shadow of the boat or be spooked by engine noise.

The planer board in essence becomes a strike indicator, surging and sagging backwards when a fish is on the line. When a striped bass strikes there’s no doubt a fish has taken the bait. Usually, the entire board goes under momentarily.

The board and fish are reeled in together (when rigged with snap swivel), or the board can be rigged to break free of the line entirely, with a pinch-pad on the front and back of the board. When rigged that way, the planer board is picked up by the angler after the fish has been landed.

The small, bright yellow boards are weighted so they sit upright and have a red flag to aid in visibility. For night fishing, boards can be rigged with lights.

Anglers use rod holders so planer boards can be fished hands-free. Typically, planer boards are fished on large boats equipped with a trolling motor, but boats as small as fishing kayaks, that are paddle powered, can be rigged to fish planer boards.

With multiple rod holders, it’s possible to troll several planer boards at once, on both the port (left) and starboard (right) side of the boat, in formation.

A slip-sinker rig is used when fishing live bait.

Very similar to the Carolina Rig used by bass anglers, the slip-sinker rig is easy to tie. Start by tying a circle hook onto one end of a 5-foot leader of monofilament line. Tie the other end of the leader to a barrel swivel.

On the main line from the rod and reel, thread on a lead egg sinker, followed by a glass or plastic or glass bead, then tie the main line onto the other end of the barrel swivel. The sinker slides up and down the line, and the bead protects the knot from being damaged.

Lake Cumberland offers good fishing for black bass, crappie and walleye, but its Striped Bass fishery, celebrating 65 years since its establishment, is what makes the lake a favorite with many anglers.

How and Why to Fish a Heavy Spinnerbait Shallow

Going fishing? Here are safety tips to ensure you don’t get pulled overboard

4 Great Ways to Store Crankbaits of Any Size