Kentucky by Heart: NKY Fly Fishers Embrace art of the sport, but outreach extends beyond wetting a line

“Fly-fishing is the simplest, purest, most skillful and pleasurable way to catch a fish,” said noted outdoorsman Nigel “Fennel” Hudson, author of the Fennel’s Journal book series. Most likely, the approximately 350 members of the Northern Kentucky Fly Fishers (NKFF), thriving since it first wet a line in 1987, would agree with Hudson’s opinion.

But not only do the members embrace the sport and art of fly-fishing (though some club-happy individuals seldom, if ever, fish), the benefits are wide-ranging and foster elements of the best in human nature. That’s because of the passionate, intentional way the group goes about its mission, that being to “promote the sport of fly-fishing through education, conservation and preservation.” 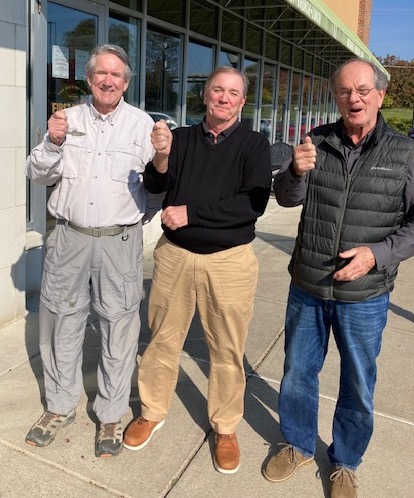 “One of the reasons we’ve grown so fast is that we make learning so easy,” said Tim Guilfoile, the club’s marketing/communications chairman.

And contrary to public perception, the costs of fly-fishing do not have to be extravagant.

“We emphasize to our new members that you can get into fly-fishing—get a nice fly rod and reel–for under a hundred bucks,” noted Tim. “Fly-fishing has a reputation for being ‘high falutin,’ but most of us in the club are middle-class worker bees.”

The Northern Kentucky Fly Fishers group prides itself in being an educational resource for various agencies in the Kentucky-Ohio-Indiana area. Parks and recreation departments, extension offices, libraries, schools, and other community organizations contact NKFF when they need any sort of classes dealing with things related to fly-fishing.

The many educational events sponsored by NKFF are also designed to be fun and to bring people together. A few years back, for instance, a group of women members met at the Beechridge Conference Center for fly-fishing tips from nationally recognized instructor Susan Thrasher. Kerry Premec wrote about the experience in an article on the NKFF website, saying: “While acquiring knowledge is very important, the building of friendships and getting to know Susan (Thrasher) and other club members is an even bigger treat.”

Called “the most famous trip in NKFF’s arsenal of trips,” a fishing event is planned in March 2022, when members will head southward to the Spring Western North Carolina Trout Extravaganza in Hot Springs, NC. The club’s website and the monthly newsletter, The Creel, aptly provides information on all NKFF’s initiatives, and they are many.

An impressive and ongoing feature of the club is that it is amazingly community-minded in carrying out all elements of its mission. That’s likely a big part of why NKFF was a co-winner of the 2021 The McKenzie Cup, given by Fly Fishers International (FFI), for making an “outstanding contribution on behalf of FFI.”

Here are some of the other outreach initiatives of NKFF:

Providing opportunities for children in the community

Steve Flairty is a teacher, public speaker and an author of seven books: a biography of Kentucky Afield host Tim Farmer and six in the Kentucky’s Everyday Heroes series, including a kids’ version. Steve’s “Kentucky’s Everyday Heroes #5,” was released in 2019. Steve is a senior correspondent for Kentucky Monthly, a weekly NKyTribune columnist and a former member of the Kentucky Humanities Council Speakers Bureau. Contact him at sflairty2001@yahoo.com or visit his Facebook page, “Kentucky in Common: Word Sketches in Tribute.” (Steve’s photo by Connie McDonald)

• Volunteers staff and provide fishing gear for the annual Family Fishing Derby at the Boone County fair, as well as staffing the Fly-fishing Summer Camp for the Boone County Conservation District

• Works with local Cub Scout troops to help them get their fishing badges; also gives a day class for earning badges at the American Heritage Girls Club at Immaculate Heart of Mary Parish

Reaching out to military veterans

• Works with disabled veterans in a program called Project Healing Waters Fly-fishing. Fishes with veterans and teaches fly-tying; takes them on a weekend trip to a fishing lodge annually at no cost to veterans

• Reel Recovery is a cancer support program for men using the healing powers of fly-fishing while providing a safe, supportive environment to share their stories with each other. “This year’s retreat was held at Lake Cumberland State Resort Park and we fished Hatchery Creek,” noted Tim Guifoile. “The first retreat in 2022 will be May 18th and will be at Lake Cumberland State Resort Park.”

• The club is in the beginning stages of an initiative for women called Casting Forward. Tim explained: “We began the development of the women’s cancer program in the later part of 2019 in partnership St. Elizabeth Healthcare. Then Covid hit and the program has not gotten off the ground yet. We will start having organizational meetings again shortly after the first of the year in hopes of providing our first retreat this year and will likely start with one- or two-day retreats.”

• Works with the park departments in Boone, Campbell, and Kenton counties to improve the quality of waters in public ponds and lakes

That said about their successful efforts in community outreach, it all starts in NKFF with the sport of fly-fishing. Tim described the uniqueness of that fishing experience. “It’s all about where you are and what you want to do… it’s about the little details that go into fly-fishing, like looking under rocks and seeing what the fish are feeding on.”

It’s about preparation before the “real” fishing starts.

“The first thing I’ll do is stand in the water,” Tim explained. “I read the water. It may be a half an hour before I make a cast—and I might not cast at all.” And though