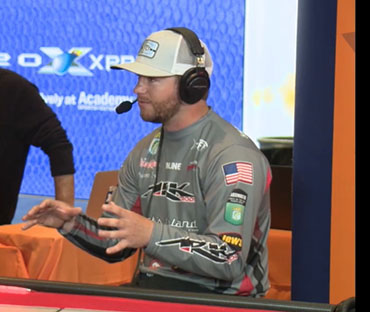 (Editor’s note: The following is the latest installment in a series of fishing tips presented by The Bass University. Check back each Friday for a new tip.)

Elite Series rookie Wes Logan is from Alabama, where throwing a swim jig is almost a religious experience, like college football and barbecue ribs. The Neely Henry local knows that there are regional variations to the technique, but its something he has tied on almost every day of the year.

Hes caught swim jig bass in waters as cold as 42 degrees, and well up into the 90s in the heat of the Alabama summer. Those varied conditions might require changing his retrieve or his trailer, but not necessarily a move to another bait.

His first choice, perhaps 90 percent of the time, is a Dirty Jigs No Jack Swim Jig, a 5/16 ounce model that he refers to as an in-between weight. He prefers to throw it on 50-pound Sunline braid, but noted that when hes around clear water and smaller fish, on lakes like Smith or Lanier, hell go to 20-pound Sunline fluorocarbon and a Dirty Jig with a lighter hook.

You dont always have to have that big gaff hook to catch em, he said. In fact, with smaller bass hes convinced that not only is it sometimes harder for the hook to penetrate, but once it does it may rip a hole in their mouth, providing them with another chance to get off. He also avoids using a heavy rod, instead choosing a 76 medium-heavy Ark Reinforcer. It has a parabolic bend that lets those fish get it. He pairs it with a 7.5:1 Lews Pro Ti, which allows him to keep the lure up in the water column, as does the long rod.

It bothers me when I cant see my jig, he explained. He said that he sees most of his strikes, and wants it to behave differently around different pieces of cover. His hookset varies depending on locations. On waters like Seminole, Santee Cooper and Eufaula, he said you’d better jerk as soon as you see the strike, but on the Coosa River they often just nip at it, so you need to give the fish a short break before crossing its eyes.

He uses a variety of Zoom soft plastics as trailers. His No. 1 choice is the Speed Craw with the bigger pincers, but if he finds the fish nipping off those claws hell go to the one with the smaller appendages. In Florida, where he tends to just chunk and wind instead of doing the Alabama Shake, he likes a 3.8-inch Z-Swimmer, and he just reels it back to the boat as he would with a spinnerbait. Occasionally, when fish are lethargic but want a big profile, hell utilize a Zoom Super Chunk, which he impales rather than threading it on.

While many anglers avoid using a swim jig in dirtier water, Logan just changes his approach. Hell add rattles, which he avoids in clear or pressured situations, and hell fish the jig closer to cover. Theyve got to get on something, he said.

If you want more intel about how Logan got to the tour level with the help of a swim jig, including additional information about regional differences, check out his full video filmed at the Bassmaster Classic in Alabama, available only by subscribing to The Bass University TV.