For novice anglers, the crankbait is an excellent entry point into the world of bass fishing.

The crankbait is easy to use and easy to master. You can use it in all weather, in most waters and, depending on the conditions, in all seasons.

Crankbaits come in many designs, and though they are periodically reinvented over the decades, they haven’t changed much. They are characterized by a fairly narrow body with a deep belly, with a distinctive angled bill on the lip. The angle of the bill determines how deep a crankbait dives. A steep angle means a shallow dive. A fairly straight bill makes a crankbait dive deep. The dive range is usually noticed on the package.

There is even a lipless version, exemplified by the Bill Lewis Rat-L-Trap. It is a sinking lure that works best when being ripped through submerged grass in the late winter and early spring.

Most crankbaits have a treble hook near the front and another dangling off the stern.

A crankbait is designed to wobble, which displaces water and creates vibration. A fish feels the vibrations through its sensitive lateral line. It processes that sensation as prey. The wobble also imitates a baitfish in distress, a visual cue that provokes a bass to strike. Some variations, like the Storm Wigglewart, have wide bodies and comparatively shallow bellies and wide bills that cause the lure to veer wildly from side to side. This “searching” action provides yet another dimension to attract and provoke bass.

A crankbait is most effective when it crashes into things. When it smashes into a rock or a log, it makes a thumping noise that can provoke a fish to bite. The impact also causes the lure to jump or ricochet, which often provokes a violent reaction.

Using a crankbait is simple. Throw it and retrieve it. With a sensitive rod, you can feel the throbbing vibrations. The best crankbait rod is limber and flexible with a slow tip. A slow tip means that the tip will bend under a load, allowing a fish to fully engage the lure. This allows a fish to essentially hook itself on the treble hooks. The angler drives the hooks home with a slow, steady sweep of the rod while reeling in the slack. The best crankbait rods are fiberglass, or a graphite composite with a high fiberglass content.

Anglers disagree about the best reels for cranking. A slow retrieve allows a crankbait to attain maximum depth. It also produces the slowest wobble, which produces the most vibration. For this, I use reels with retrieve ratios of about 5.3:1. In the early 1990s, Shimano, Abu Garcia and other companies produced special cranking reels with 4.1:1 ratios. Reels with retrieve ratios below 6.2:1 — which in the 1990s was considered blazing fast — are very rare these days. You can crank a 7:1 or 8:1 reel slowly, but that is still too fast in my opinion because it robs the crankbait out of some of its action.

Crankbaits are extremely effective in shallow water, 8 feet or less, where they can contact wood cover, collide with rocks or dredge through silt and gravel. Rick Clunn, winner of four Bassmaster Classic championships, made his name shallow cranking. In early summer, he often used bluegill pattern crankbaits to catch bass guarding nests. He used this pattern to great effect in a Bassmaster Elite-50 tournament on Lake Dardanelle in 2005. Bream, he explained, try to raid bass nests. Bass won’t tolerate their presence and act against bream-colored crankbaits with extreme prejudice.

Clunn very nearly won his fifth Classic in 1992 fishing a small rock formation with a crankbait in Lake Logan-Martin near Birmingham, Ala. Whenever he caught a fish off the rock, another one moved in to take its place. The pattern went dry on the last day of the tournament. Years later, a member of a local bass fishing club admitted that several of its members dumped automotive batteries on that spot to shut Clunn down in hopes that an Alabama angler might win.

A crankbait with a sharp-angled square bill shines in really shallow water. By design, a squarebill has an exaggerated action. The bill has such a sharp downward angle that it shields the front treble hook from snagging wood, allowing an angler to use it in cover that would guarantee the loss of a traditional-style crankbait. Plowing it through brush and treetops is a very effective way to catch bass. Kevin Short of Mayflower, a longtime professional bass angler, excels with this technique, as does Kevin VanDam, also a four-time Bassmaster Classic champion.

While the crankbait is traditionally a shallow-water game, a secretive cabal of North Carolina anglers led by David Fritts perfected deep-cranking techniques in the late 1980s and early 1990s that enabled them to catch big bass on deep structure on clear Piedmont lakes in the summertime. His secret was drilling holes and injecting lead in Poe’s and Bagley crankbaits, which were made of balsa. This made crankbaits suspend when they weren’t in motion. Most unmodified crankbaits rise when they stop. That, of course, is advanced cranking, but Fritts used the technique to win the 1993 Classic on Lake Logan-Martin.

Regardless of the depth, the common denominator is to get a crankbait among fish. The same rule applies to any bait, including jigs and plastic worms. Bouncing a crankbait off cover is an effective, time-tested way to catch largemouth bass, Kentucky bass and smallmouth bass for anglers at all levels of expertise. It’s an extremely effective confidence lure that will provide a solid foundation from which you can explore other lures and techniques. 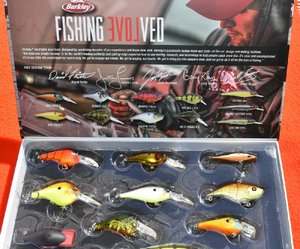 David Fritts, winner of the 1993 Bassmaster Classic, and Scott Suggs of Bryant created a new line of crankbaits for Berkley.
(Arkansas Democrat-Gazette/Bryan Hendricks) 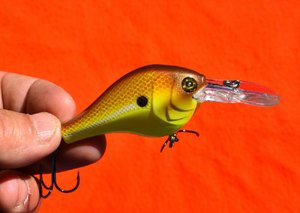 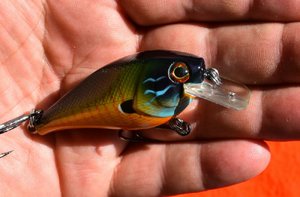 The Pit Bull (shown) is a squarebill model painted to look like a nest-raiding bluegill.
(Arkansas Democrat-Gazette/Bryan Hendricks) 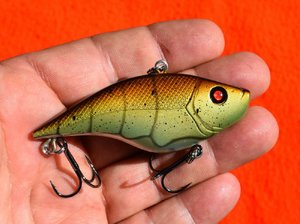 The War Pig (shown) is a lipless model made famous by the Cotton Cordell Spot and the Bill Lewis Rat-L-Trap.
(Arkansas Democrat-Gazette/Bryan Hendricks)